Last week, crude oil prices fell below the key $80 per barrel mark on international markets as new information confirmed a slowdown in the economic recovery — weak manufacturing activity in Europe and China—, and with OPEC’s decision to maintain production at the current 30 million barrels per day amid market oversupply.[1] Globally, crude oil prices are determined by the interplay between market expectations in which today’s price reflects lower future demand and increased future supply. Lower demand reflects both the current weakness of economic activity, particularly in Europe and China, and more importantly in the longer-term, total factor productivity changes (technological changes) such as increases in fuel efficiency and non-fossil based supply sources.

The increase in the potential future supply of oil reflects the new output from fracking (shale gas and oil) predominantly in the United States, the development of Canadian tar sands among others. Several OPEC members, heavily dependent on oil receipts to balance their budgets, had during last week’s meeting pushed for a production curtailment to boost the price. Most OPEC members require a break-even oil price above $80 dollars a barrel to balance their budgets. On the basis of these developments, many sub-Saharan African oil producer countries are exposed to the threat of declining oil prices on economic activities.[2]

One of the clearest signs as yet of how oil producing nations are struggling as prices slump is the Central Bank of Nigeria’s decision to devalue the Naira by nearly 8% and raise interest rates by 100 basis points to 10% to protect forex reserves.[3] Against this backdrop, the question that lingers on my mind remains: what would be impact of these global developments on Ghana’s fragile recovery should the current price depression continue? This is especially important given the fact that the Cedi, the local currency, has for the major part of 2014 depreciated against all major international currencies; most notably against the dollar by almost 35%.

In 2013, crude oil exports accounted for about 20% of Ghana’s total merchandise exports. This corresponded to a total production of 35.59 million barrels of crude oil (an average of 99,685 boepd), compared to 2012 total production of 26.35 million (an average of 71,998 boepd). The 2015 Budget estimates total revenue from oil at US$1.24 billion (GH¢4.2 billion), equivalent to 3.1 percent of GDP and representing a benchmark output of 37.42 million barrels. The recent stability of the Cedi might fall victim to lower oil prices with evidential weak forex inflows and lower corporate tax receipts. At $100 per barrel reference price and based on current output of  circa 100,000 boepd, Ghana could earn over $700million annually from oil exports not including corporate tax receipts, surface rentals or other charges. However at a price level between $60 and $70, that number plummets below $500 million on the same output basis.

In 2013, higher-than-projected project revenue outturns resulted in a windfall with actual petroleum revenues exceeding expected revenues by US$265.05 million (GH¢522.86 million), representing a deviation of approximately 46%. This was due to higher prices, increased crude oil production and the receipt of corporate income tax from operators. How precarious will this be? Though the 2015 Budget anticipates the impact of the continuous decline of crude oil prices and its implications for Government’s fiscal position for the rest of 2014 and 2015 in terms of revenue underperformance, Government is however handicapped in terms of its ability to revise down the reference benchmark price.[4] This is because benchmark revenues are calculated by rules stipulated under the Petroleum Revenue Management Act (PRMA) as the seven-year moving average of dated Brent, the reference marker crude.

Hence, in the event that crude prices continue to fall below the 2015 projected benchmark of US$99.38 per barrel on the international markets, the Government may be forced to make withdrawals from the Ghana Stabilisation Fund to shore up forex reserves and to augment the budget (Annual Budget Funding Amount, ABFA). To this extent, I support proposals to review the PRMA to allow Government to incorporate a lower benchmark price should indicators point towards a downward price trend over the course of the fiscal year regardless of the seven-year moving average. It is better to underestimate petroleum revenues and plan likewise for the ancillary expenditures in line with ABFA than to overestimate and be left with a huge revenue gap to fill, which ultimately translates into withdrawals from the Stabilization Fund. 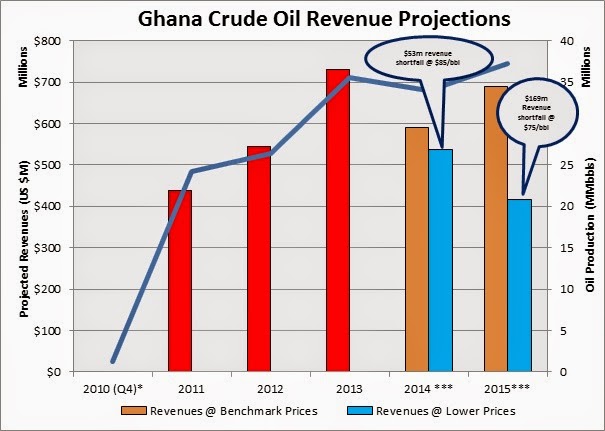 Aside country fiscal terms, oil prices rank among the key investment decision criteria used in sanctioning development projects in the industry. The development of the Tweneboa-Enyera-Ntomme (TEN) fields, the Plan of Development which was sanctioned by the Minister for Energy and Petroleum in May 2013 is unlikely to be affected by the recent price slump. This is because all major contracts for the conversion of the new FPSO and subsea infrastructure and a drilling rig have been secured. The TEN field has estimated recoverable reserves of 245 million barrels (mmbls) of oil and 365 billion cubic feet (bcf) of gas and will cost US$4.9 billion to bring online with first oil expected to be delivered mid-2016, excluding the FPSO lease costs. Production output from the field is expected to reach a plateau 80,000 barrels a day output.

The other key project which is the Sankofa-GyeNyame discovery located in the Offshore Cape Three Points (OCTP) block is predominantly a gas discovery and as such not wholly dependent on oil prices to break-even. Technical appraisal work including commercial assessment has been completed on the block and it is estimated to hold combined oil and gas reserves of 116 million barrels (mmbbls) and 1.11 trillion cubic feet (TCF) of gas.[5] First oil from the field is expected be in 4Q 2016 with first gas following a year later in 4Q 2017. The gas from TEN and Sankofa-GyeNyame remain critical to Ghana’s medium term plans of delivering at least 5,000MW of energy generation capacity to fuel her industrialization agenda.

Though the fall in crude oil prices should naturally translate into lower end user prices to help stem inflation and propel economic activity, the current setup of Ghana’s downstream petroleum sector is such that we are unlikely to witness any significant changes at the pump. The quasi-deregulated downstream sector which handles petroleum product distribution, supply and manufacturing in the country under the regulatory authority of the National Petroleum Authority (NPA) and consists of the Oil Marketing Companies (OMCs), Oil Trading Companies (OTCs) and Bulk Distribution Companies (BDCs) is by and large an oligopolistic market. This is further exacerbated by the huge taxes [6] and duties on petroleum products and under-recoveries on account of forex losses by fuel importers. Ghana’s crude oil import bill (including gas) for 2013 alone stood at over $2.6 billion. On the basis of this, the following questions still remain unresolved in my mind:

In conclusion, Ghana’s economic recovery hinged on the achievement of the 2015 budget and medium term objectives is inextricably linked to oil prices recovering from the current slump. As a primary commodities exporting nation (including gold, cocoa and non-traditional exports), the recent stability of the Cedi might fall victim to lower oil prices with evidential weak forex inflows and lower corporate tax receipts. This has the potential to significantly affect the country’s gross international reserves and balance of payments (trade deficit). At $100 per barrel reference price and based on current output of circa 100,000 boepd, Ghana could earn over $700million annually from oil exports not including corporate tax receipts, surface rentals and other charges. However at a price level between $60 and $70 that number plummets to below $500 million on the same output basis.

The writer is the Co-Founder and CEO of Africa Economics, LLC., a niche Africa oriented economics consultancy offering services in macroeconomic forecasting, political and country risk solutions and business intelligence services. He is a PhD Candidate in Economics at the University of Aberdeen, Scotland and can be reached at theo.acheampong@africa-economics.com

Next in the Ghana energy series (time permitting):