Government, against the backdrop of falling crude oil prices and signing of the $940million IMF extended credit facility agreement; presented revised revenue estimates based on a revised Petroleum Benchmark Revenue (PBR) from US$99.38 to US$52.8 per barrel to Parliament on 12 March 2015. Consequentially, total petroleum receipts for 2015 were slashed to GH¢1.5 billion (1.1 percent of GDP), compared with the original Budget estimate of GH¢4.2 billion (3.1 percent of GDP).

The 2014 macroeconomic targets versus actual performance are shown below[1]: 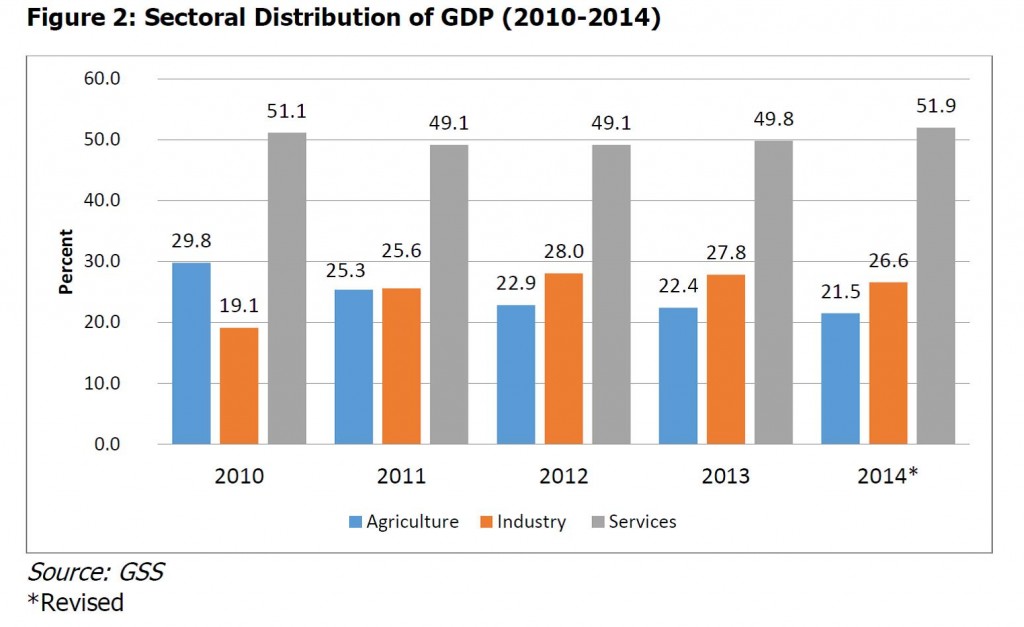 Significantly, the non-attainment of the 2014 growth targets was because of the persistent and never-ending electricity crisis (known in local parlance as ‘dumsor’), which has had severe impact on livelihoods and industry. As can be seen, Ghana’s economy has moved from agriculture towards services provision (50 percent of GDP output) in the past two decades. This sector is heavily reliant on reliable electricity supply to support growth and service delivery. Hence, it comes as little surprise that GDP growth tanked in 2014 in the wake of the severe energy crisis.

The rise in inflation to 17 percent for the year was driven mainly by the 35 percent depreciation of the Cedi to the dollar — Ghana’s economy is heavily import dependent economy relative to her exports — as well as the pass-through effects of the utility tariffs and transport costs increases. To deal with inflationary pressures, the Monetary Policy Committee (MPC) of the Bank of Ghana raised the benchmark MPC rate by a cumulative 500 basis points from 16 percent in 2013 to 21 percent in 2014 but this did little to stem inflationary pressures.

In fact, this move run contrary to the objective and made interest rates (access to credit) high for businesses. Many are already struggling to keep in the black due to the persistent energy crisis and rising factor input costs to their production. Many businesses have been crowded out from accessing credit at high average interest rates of above 30 percent. This is counterproductive to the official mantra of growing a services and export-led industrialised economy. Ghana’s largely informal economy defies traditional economic orthodoxies of money supply and aggregate demand.

The 2015 budget envisages the following targets: (1) Non-oil real GDP growth of 2.7 percent; (2) overall real GDP (including oil) growth of 3.9 percent; (3) an end year inflation target of 11.5 percent; (4) overall budget deficit equivalent to 6.5 percent of GDP and (5) gross international reserves of not less than 3 months of import cover of goods and services.

What is the likelihood of the government achieving these targets? Subject to the resolution of the energy crisis, sustenance of the recent appreciable gains made by the cedi against major international trading currencies, the move towards deregulation of petroleum products pricing and economic activity picking up from 3Q 2015, overall real GDP (including oil) growth is expected to remain in the 4-5% of GDP band.

However, there will be significant lags in inflationary pass-through and so it is highly unlikely that that the end year inflation target of 11.5 percent will be achieved. We anticipate inflation to fall in the region of 13-15% conditional on the above factors. Similarly, the budget deficit target is unsustainable and looks increasingly likely to close the year over 8% of GDP, as is the international reserves position, which we forecast to close the year at  about 2.5 months of import cover.