The one thing that often strikes me in my research on Ghana’s recent economic history is why despite the country being one of the new petroleum producing developing countries; it has witnessed one of the most lasting periods of economic hardships in our post-independence history ― aside the lost decade of the late 1970s to mid-1980s.

Many ordinary folks on a daily basis go through the ordeals associated with hard-pressed economic circumstances: high bank interest rates of about 35%; hikes in utility prices; weak local currency with the cedi having depreciated by almost 20% year-to-date; inadequate electricity supply ― aka ‘dumsor’; rising inflation at almost 17%; and antecedent job losses as well as dwindling productivity as many businesses especially MSMEs contemplate shutting or scaling down operations in response to these challenges.   ‪

Well it turns out that despite the country producing a little over 100,000 barrels of oil daily over the past four years, very little of this has actually trickled down into fundamental economic levers with the expected multiplier impacts on improving livelihoods. To understand these developments, I will devote the next couple of paragraphs to explain this seeming contradiction. For the purposes of this essay, we shall compare the following periods: the four years from 2007-10, which we classify as the pre-oil economy and 2011-14, the post-oil economy. 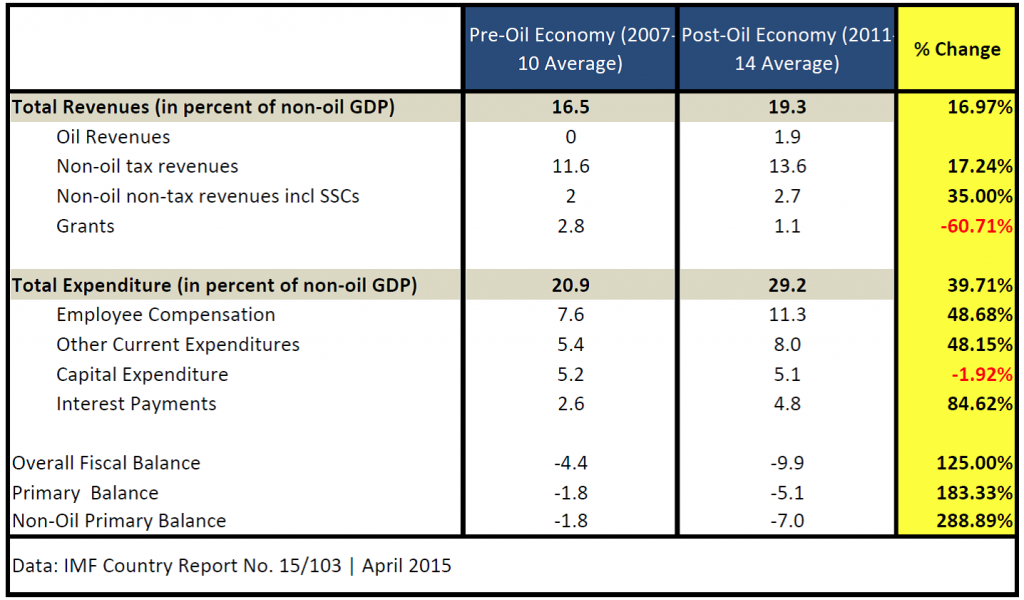 In the pre-oil economy (2007-10), average total revenues totalled 16.5% of GDP comprised of 13.7% of GDP non-oil tax revenues and 2.8% of GDP coming from donor funded grants. At the same time, Ghana’s total expenditure constituted 20.9% of GDP of which employee compensation accounted for 7.6% of GDP; 5.4% of GDP for other current expenditures; 2.6% of GDP went into servicing debts by way of interest payments and only 5.5% of GDP going into critical capital expenditure.  The net effect of this was an overall fiscal balance (budget deficit) of 4.4% of GDP.

Fast forward into the post-oil era (2011-14), average total revenues amounted to 19.3% of GDP, a 17% increment over the 2007-10 average. Interestingly, though oil proceeds accounted for 1.9% of GDP as a new budgetary funding source, donor grants fell substantially by 61% to 1.1% of GDP compared to 2.8% of GDP in the pre-oil era. Essentially, oil revenues have replaced the loss of donor grants and concessionary funding on account of Ghana’s new lower middle income status —lower middle income (LMICs) have GNI per capita between $1,006- $3,97.[1]

By contrast, total expenditure in the post-oil economy (2011-14) also increased by 40% compared to the pre-oil economic period to 29.2% of GDP. This consisted of a 49% increment in employee compensation due to the implementation of the Single Spine Pay Policy to 11.3% of GDP. Other recurrent expenditures also increased by 48% to an average 8% of GDP and likewise a near-doubling of interest payments to 4.8% of GDP.

However, the biggest shock in all of this setup is that actual capital expenditure has remained nearly stagnant. Capital expenditure fell from 5.2% of GDP in the pre-oil period to 5.1% of GDP in the post oil period. Capital expenditure is the amount spent to acquire or improve long-term assets such as equipment, buildings or other infrastructure. Gross capital formation, which measures additions to the fixed assets of the economy ―e.g. roads and other infrastructure ― plus net changes in the level of inventories has barely changed from the ~25% of GDP recorded over the past years.[ii]

The net effect of this continuous and disproportionate expansion in expenditure (relative to revenues) which were incurred mostly on recurrent line items like payment of salaries and wages for public sector workers has been the ballooning of the fiscal deficit to 9.9% of GDP in the post oil period.

The country’s graduation to a lower middle income country due in part to the recent rapid economic growth and the 2010 GDP rebasing exercise meant that Ghana suddenly found itself above the income limit for International Development Association (IDA) eligibility —IDA is the part of the World Bank which delivers development assistance to the world’s poorest countries. As Todd Moss and Stephanie Majerowicz of the Centre for Global Development argue “in November 2010 the country reached this milestone a decade early through a somewhat unconventional and in many ways unexpected way: a technical statistical adjustment… This accelerated leap put the country into a new income category overnight”.[iii]

So, can oil revenues anchor Ghana’s fiscal policy? Clearly, given the current production levels and recoupment of capital investment costs, oil revenues cannot anchor Ghana’s medium term fiscal policy. Though revenues will bring fiscal relief to the budget, the recent curtailment of donor funds implies that these revenues will go to plug another fiscal hole and not necessarily become a new funding source that has been envisioned.

In the absence of substantial short term commitments by the government to rein in expenditure through value for money audits on contracts, wage rationalization, etc., as well as the more fundamental medium to long term structural economic reforms to boost non-oil tax revenues, then a majority of the populace will struggle to see the benefit of this natural resource. A similar story pertains in the mining industry!

For oil revenues and the industry as a whole to effectively contribute rents to the national kitty, we can no longer see the industry as an enclave activity. Instead, the industry can and should be used to catalyse industrial development through deepening the pattern of linkages, particularly the forward and backward linkages ― i.e. general upstream and marine services.