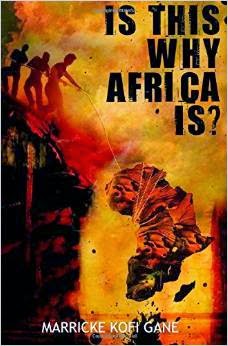 Africa today is a continent of almost 1 billion people, and has witnessed a remarkable growth story over the past decade —growth rates have averaged over 5% year-on-year over the past years — and with it, the rise of its middle class with varying consumer tastes and preferences. Today, the continent is estimated to grow faster than any other region in the world. This marks a profound shift juxtaposed against events only two decades ago where Africa’s macrosocioeconomic prospects were confined to the doldrums underdevelopment with leading international mainstream newspapers and magazines calling it “The Hopeless Continent” among other characterizations. Many writers have often cited poverty, disease, starvation, wars and tribal conflicts fuelled by a vicious neocolonial legacy and corrupt crony governments, which are a function of the political and institutional setup as the cause of the continent’s woes.

It is against these changing dynamics that Marricke Kofi Gane’s “Is This Why Africa Is?” sets an inquisitorial tone to understand how a continent, once basking in the glory and new sense of nationhood and Pan-Africanist struggle in the post-independence years of the 1960s, became marred by an almost four decade cancerous economic stagnation, some of the resultant effects are the disease, starvation, wars and tribal conflict which continue to linger in some parts of the continent to date. From the very first chapter, the book takes the reader into how a generation’s hopes were dashed only a few years after independence. He recounts on the various sojourns with his grandfather, how his grandfather used to talk about his pride and grand aspirations the new nation Ghana (and Africa), under the leadership of Kwame Nkrumah, had to become a “first-world” country and continent.

Can someone please tell me why the African economic miracle and emancipation cannot be achieved? If anything, Marricke Kofi Gane’s book has reaffirmed the revivalist spirit in me to ensure that the paradigm is changed fundamentally from a continent of consumers to producers, at least in my life time.  Africa need not be the dumping or playground of globalisation and the powerful forces therein; the African lion needs an endogenous growth trajectory — a bottom up approach — in which she leverages the numerous human, material resources and potential opportunities her agricultural, commodities, services and the manufacturing industries offers, together with the vibrant energies of her people for sustainable growth and development.

This is definitely a recommended read for anyone who is interested and wants to contribute to the development of the continent. It is the work of a passionate pan-Africanist wanting to see the status quo reversed. Marricke Kofi Gane is a gifted author, philosopher, public speaker, coach and educationist, and is certainly one who critically examines and questions.

The writer is the Co-Founder and CEO of Africa Economics, LLC., a niche Africa-focused economics consultancy that provides energy sector advisory services as well as country risk services and business analytics solutions.

Is This Why Africa Is? By Marricke Kofi Gane is available on Amazon worldwide in Paperback ($4.95) and Kindle ($3.09) versions at: http://goo.gl/g0edNE