For most countries where near-universal primary school (primary and junior secondary) enrollment is high, there is the challenge of ensuring these children also get a secondary education as well at the minimum. This is to ensure social mobility and effective participation in the labour workforce. For example, primary school enrollment in El Salvador stands at almost 90 percent versus 34 percent for secondary education. Most countries in Latin America have committed themselves to increasing access to quality secondary schooling to at least 75 percent of their children.

Figure 1 Educational Structure and Termination Point in Ghana | Source: Wikimedia CommonsThis paradigm must change, and my core belief is this: schooling from primary to the secondary level should be free for all regardless of the income or background of one’s parents. Personally, I think it will be difficult to apply means testing within this context of education. For example, by what assessment criteria? That is the crux of the debate on free secondary schooling in Ghana.

I think it is better for everyone to get an equal shot – not necessarily equitable, but it suffices as a second best optimal solution given our circumstances. Any proposal to apply blanket means testing to public education, wherein supposed relatively wealthy families would be required to pay to attend public secondary schools although does appear progressive, is a Trojan horse.

Under the current progressively free model, funding of secondary education is split between the government and parents. The government only provides a subvention of GHS54 and GHS58 per term for day and boarding students respectively that covers exam, library fees, SRC dues, ICT, and utilities among others. The government subsidy component for new students amounts to 21 percent of the approved fees for day students and 8 percent of approved fees for boarders. Parents, on the other hand, have to bear the remaining cost component covering uniforms, feeding fees, exercise books, PTA and House dues as well as extra-curricular activities. 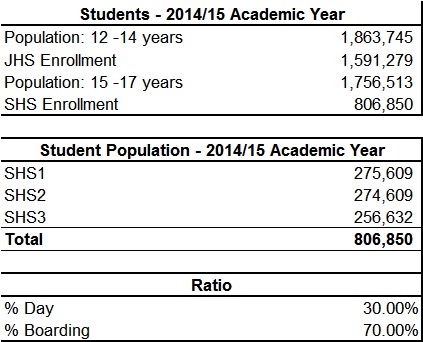 Data from the 2014/15 academic year indicates there were 275,609 students in SH1, 274609 in SH2 and 256,632 in SH3 making 804,974 students in total. Using the 2015/16 Ghana Education Service approved fees and the total number of students, the maximum upper bound cost to the taxpayer assuming 30:70 split between day and boarding amounts to  GHS1.1 billion or USD276 million (0.80 percent of 2015 GDP). One caveat: this crude estimate, of course, assumes infrastructure facilities and enrollment rates in the schools are fixed. It nonetheless serves a useful starting point for policymaking. Should the NPP government decide to absorb all the other costs that hitherto were excluded from the progressively free (absorbed fees), then the total incremental cost to the taxpayer would amount to GHS985 million or 0.71 percent of 2015 GDP. 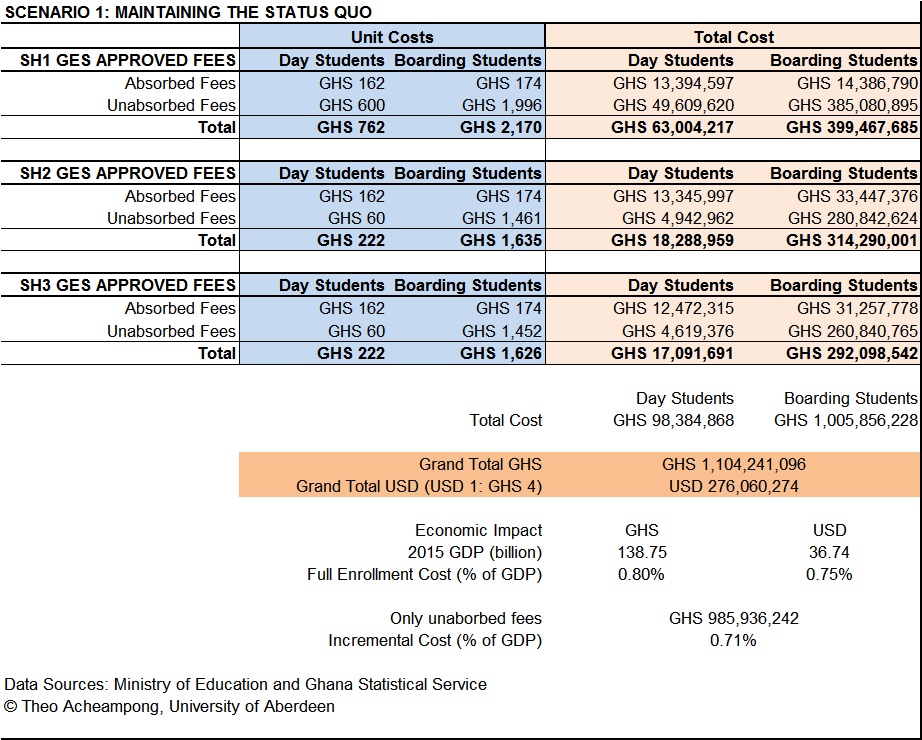 Using the same 2014/15 enrollment data but extending the net wider now to include all 1.6 million JHS students, the maximum upper bound cost to the taxpayer assuming the same 30:70 split between day and boarding amounts to GHS 2.2 billion or USD 547 million (1.58 percent of 2015 GDP). This option entails a more fundamental educational reform to Ghana’s education architecture by scrapping the not fit for purpose BECE. Also, we need to factor in extra infrastructure investment costs, additional teachers, curriculum development among others. This is because the currently available facilities cannot accommodate all the students. This can easily push up the total cost by a factor of about four towards the USD 2 billion mark. 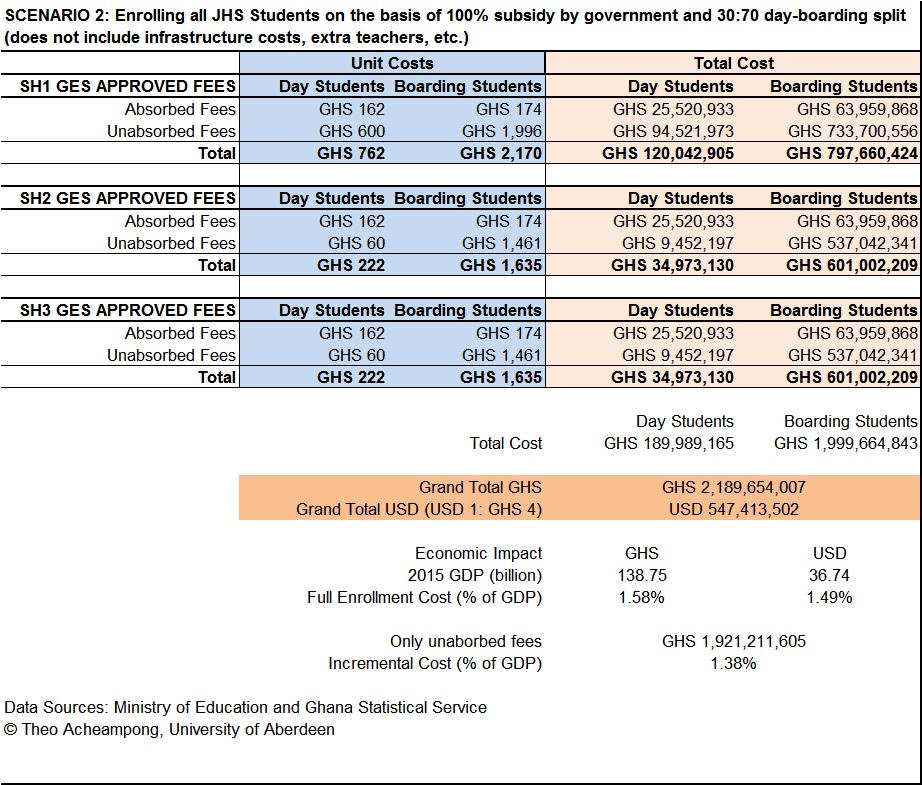 I do support means testing direct government benefits such as unemployment, disability and pension allowances but that is where the buck should stop. I do not support such blanket moves in the provision of education services, as it is neither welfare maximising nor provides a social safety net. The above notwithstanding, I do however think the government needs to take a second look at the boarding component of this proposed policy. I am of the firm belief that this cost should be split between parents. There is no need to provide feeding to both day and boarding students. Day students under the current system already buy their food. The most equitable approach would be for the government to provide all students in secondary schools the same amount of subsidy and this should be equal to that which a day student would have paid under the current circumstances together with the GHS54 and GHS58 per term subsidy government already pays. Students who then have an offer to get into the boarding house but whose parents do not have the means to pay for the remaining amount can then apply to a special fund to access the remaining subsidy amount. At least, this way we can keep the cost down and also ensure some fairness in the distribution of the resource.

I will caution the government not to touch the Heritage Fund as it is meant to provide for intergenerational equity and permanent income. That is, an annuity intended to smooth consumption over time. The Fund had a closing book value of a paltry US$277 million including interest as at December 2016. By contrast, we have allocated over $1.43 billion to the ABFA, $0.60 billion to the Stabilisation Fund and another $0.93 billion to GNPC between 2011 and 2015. Restructuring SSNIT, GETFund, stopping revenue leakages and cancellation of tax exemptions as well as dedicating portions of the Communications Service Tax that goes to YEA, MASLOC and so forth can fund this. The government needs to be creative.

Appendix: GES List of Approved Fees for the 2016/17 Academic Year 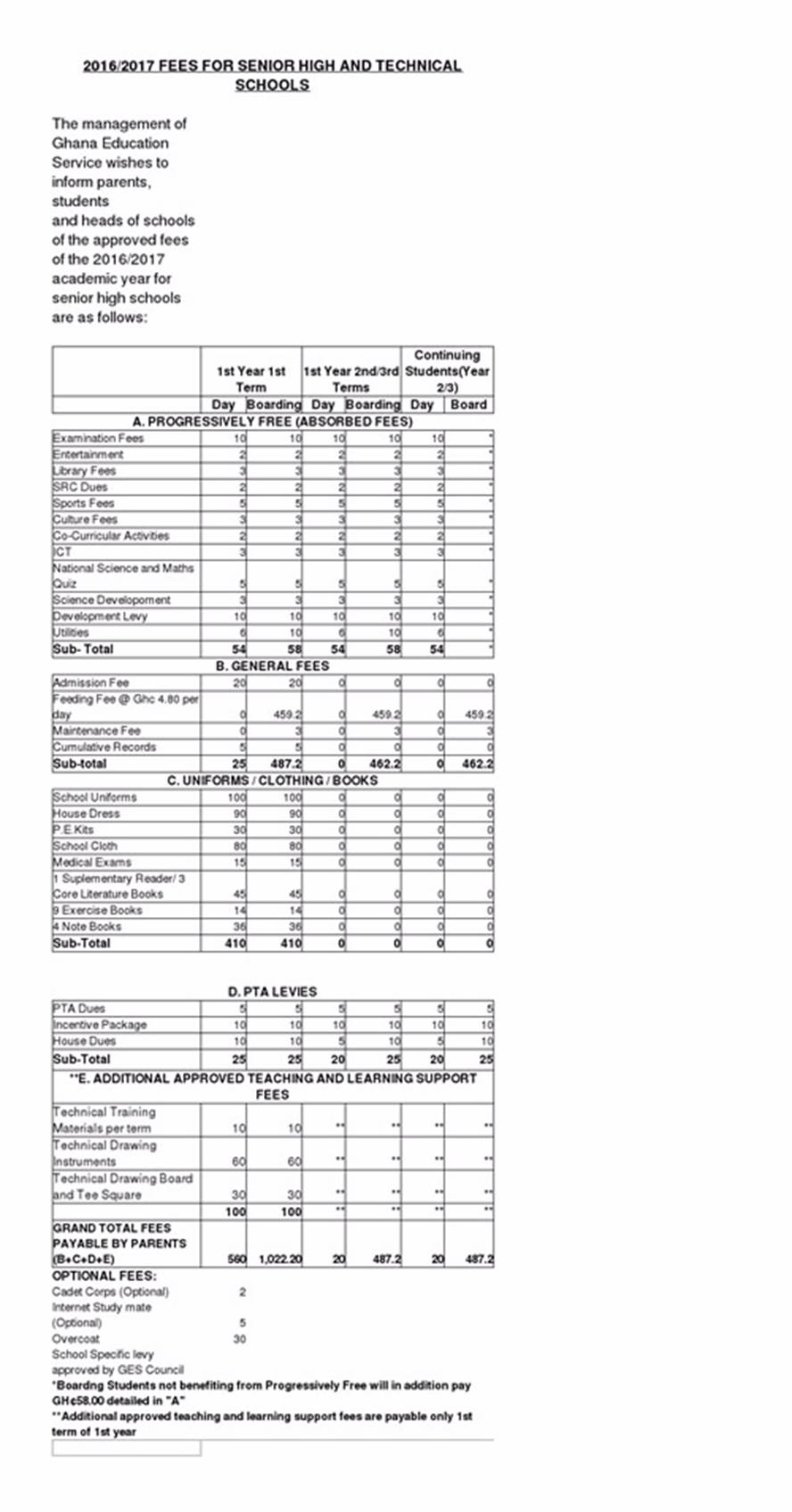