So, I spent time going through the comprehensive 378-page report titled “Domestic Violence in Ghana: Incidence, Attitudes, Determinants and Consequences” authored by the Institute of Development Studies and the Ghana Statistical Services, and attempt to present some of the key findings.

The study analysed the incidence of the following forms of violence (both within and outside domestic relations):

1. SEXUAL VIOLENCE – acts of unwanted sexual comments or physical contact; rape by physical force, or otherwise forced sex (for instance, by blackmail or threats); denial of using protection during sex; a sexual partner hiding their HIV status; sexual acts or intercourse that were performed on the basis of feeling there was no option; or penetration with an object against someone’s will;

2. SOCIAL VIOLENCE – acts of controlling behaviour, such as preventing someone from seeing friends or family of birth; stopping someone from leaving the house; requiring to know where someone is at all times; stalking; spreading false information, videos or photos without permission; or forcing women and girls to have an abortion;

3. PHYSICAL VIOLENCE – slapping, pushing, shoving, hitting, kicking, dragging or throwing objects at someone; choking, strangling or burning someone; using a weapon, hazardous chemicals or substances against someone; or kicking or pulling someone’s external genitalia (for male respondents only);

4. PSYCHOLOGICAL VIOLENCE – insults, belittling or humiliation in private or in front of others; threats of abandonment; being ignored or treated indifferently; intimidations and acts aimed at scaring someone; threats of using weapons against someone; or threats of hurting someone or someone one cares about;

5. ECONOMIC VIOLENCE – denial of household money for expenses (chop money) even if enough financial means are available; unsolicited taking of money; control of belongings and spending decisions; damage to or destruction of someone’s property; denial of the right to work; forcing someone to work against their will; or denial of food and other basic needs.

2. The most prevalent form of sexual violence among both women and men over their lifetimes was being subject to sexual comments (18 percent among women and 12 percent among men).

4. Being physically forced to have sex (9 percent among women and 7 percent among men). These patterns of sexual violence were very similar across the lifetime of individuals and in the 12 months before the survey

5. Age Patterns: Similar to social and physical violence, the incidence of lifetime sexual violence was higher among younger women

6. Employment status: Employed women and men (42 and 32 percent, respectively) were more likely to have experienced sexual violence than men and women not in employment

At least this survey gives us a good indication of the trend: namely, that women by far are exposed to greater levels of sexual violence than men. A good starting point to have engaging conversations towards finding solutions to this social menace.

Overall levels of incidences of violence in Ghana from social, physical, sexual, psychological and economic violence. Note: most of these violence levels are also correlated across space and time 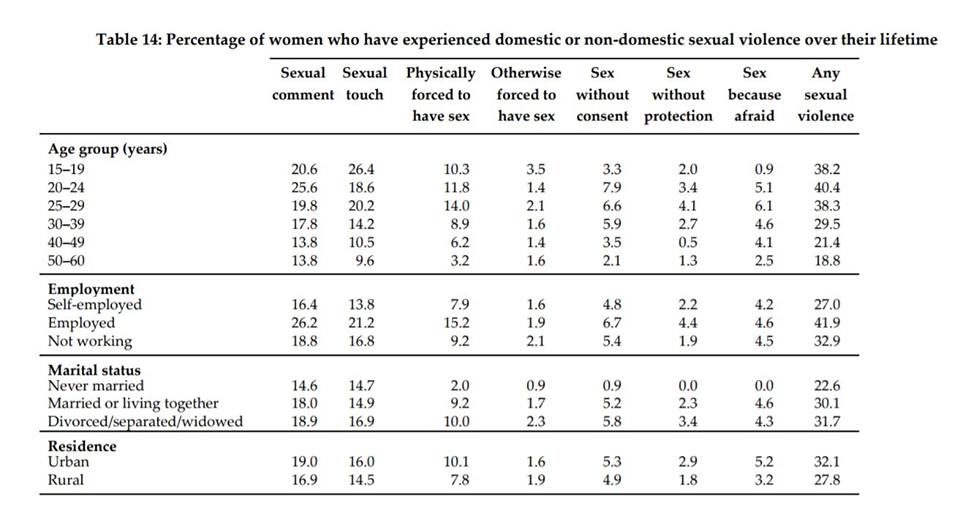 Percentage of women experiencing sexual violence over their lifetime 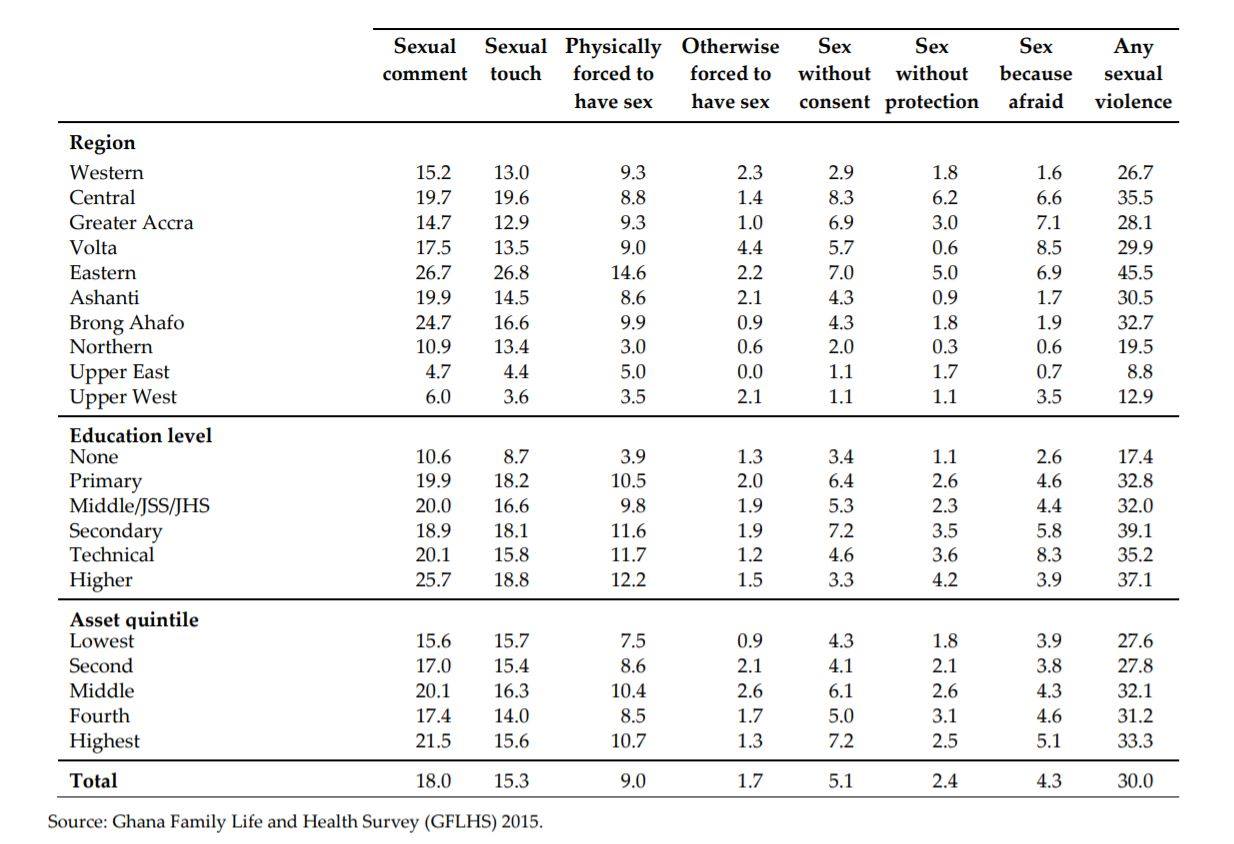 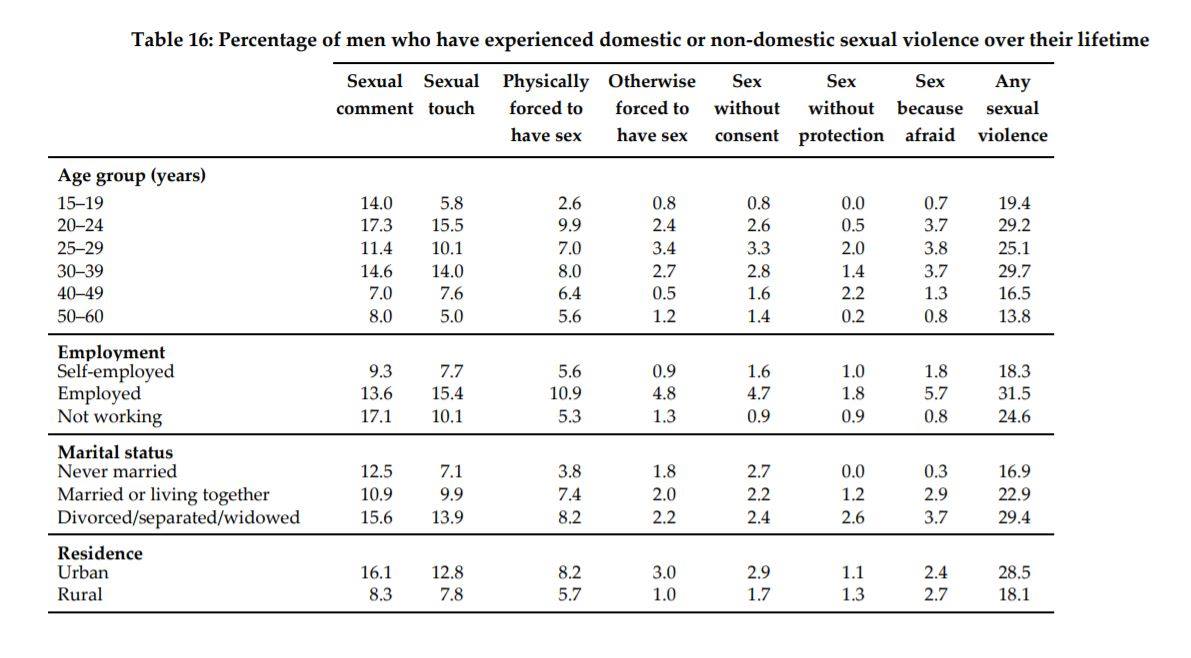 Percentage of men experiencing sexual violence over their lifetime 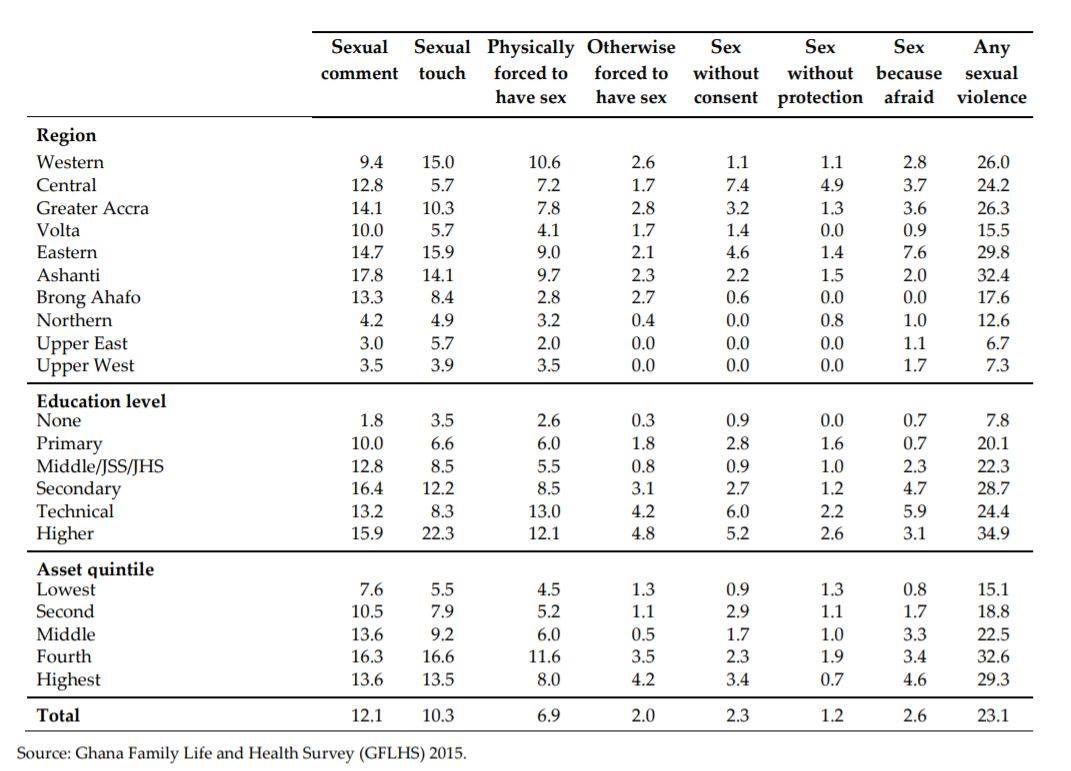