Renowned legal scholar and academic Dr Raymond Atuguba, an Associate Professor of Law and Development at the University of Ghana speaking yesterday (16 February 2018) at the second annual GIMPA Law Conference is reported to have sought to create a link between voting trends by judges of the Supreme Court and the political party that appointed them into office.

In his presentation titled “Politics and Judicial Decision-Making: Case Studies from Ghana’s Supreme Court” in Panel Session 2 moderated by Justice Jones Dotse, a Justice of the Supreme Court of Ghana, Dr Raymond Atuguba posited a theory of political party affiliation and judges’ decisions regarding Ghana’s jurisprudence. In the preceding parts of his arguments, he proposed a three-pronged approach to judicial scrutiny namely (1) scrutinising judgments regarding its fidelity to the law, (2) scrutinising judgements for the way in which judicial discretion has been exercised, and (3) scrutinising judgements for political influence.

Dr Atuguba analysed the voting pattern of Ghana’s Supreme Court judges from 1993 to 2018 by taking political 100 cases and looked at the judges who sat on them and the extent to which their loyalty to the appointing authority, in this case, the President, influenced the outcome of their judgements. Essentially, Dr Atuguba sought to test the so-called “loyalty effect” or “judicial partisanship effect” akin to the work of Segal and Cover (1989), Epstein and Posner (2016) and numerous other scholars whereby justices more frequently vote for the government when the president who appointed them is in office than when subsequent presidents lead the government.

He functionally defined political cases within the context of his research as “where you have a political party or politician or politically-exposed persons as a party to a suit or where it revolves around issues that inure to the political, social, financial or other benefits of a political party or its operatives or known affiliates”. The research examined 39 justices of the Supreme Court sitting on 462 cases of which 180 cases were decided in favour of the NDC and another 172 cases being decided in favour of the NPP and remaining cases belonging to a “neutral” category. He also said this 2% margin of the cases going to the NDC is coincidental to the margin of the number of judges appointed by the NDC relative to the NPP. Dr Atuguba then proceeded further to conduct an analysis of 100 cases out of the 462 cases which met this functional definition. 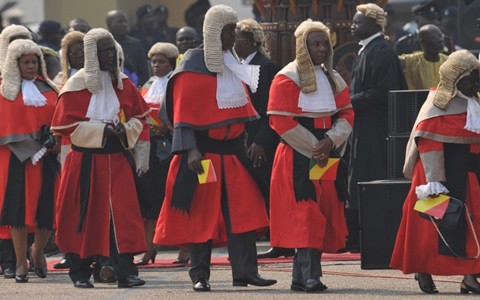 An identifying feature of the 100 cases and one of the papers’ core arguments is that “it is true that where the law is clear in the case, then you [the judges] cannot import politics [or political leanings] to bear on the judgment, but the identifying thing about these 100 cases is one in which the position of the law is not clear”, thus giving room for the judges to bring other variables such as political leanings in ruling one way or the other. An indicator of this potential political colouration/ideology is the divided nature of the rulings in such cases; for example, a 5-4 decision.

In tracing the historical antecedents, Dr Atuguba further argued that judges were voting less according to who appointed them at the beginning of the Fourth Republic in 1993 because explicit provisions in the new 1992 constitution allowed the judges to give unanimous judgments in cases that were clear. However, in the late 1990s to late 2000s, the court’s judgments started “becoming clear on the lines of party appointments” but this trend seems to have been reversed in recent times with the court now giving unanimous judgments; that is, “the Supreme Court is finding its feet again, where it is giving unanimous judgments based on the law and not the source of the appointment.” The primary reason adduced for this is the growing public interest, resulting in more scrutiny and transparency in how a judgment is delivered, a classic case is the recent 2012 elections petition.

Further to this, the research suggests that “overall, the data reveals that 14 out of 22 NDC (National Democratic Congress) Supreme Court appointees, making up 64 percent of the party’s appointees to the Supreme Court have given judgments in favour of the NDC, and the NPP (New Patriotic Party) has had 13 of their 16 judges giving a majority judgment in their favour, making 81 percent consistency“.

The opprobrium greeting the research findings has been led in part by some leading justices of the court namely Justice Sophia Akuffo (The Chief Justice) and Justice J.V.M. Dotse, who coincidentally were also present at the function. In her remarks, Justice Sophia Akuffo said that under the 1992 constitution judges will be appointed during somebody’s time and that judge will belong to one party or the other; and that following an appointment, it is up to the judge to “put whatever political sprinkling (colouration ) what has motivated their decision on the ruling but so long as it is line with the law, and is sound and follows the facts”, then it may not be an issue. She then urged the lead researcher to be “careful of what he is importing into our political environment” as this could easily be misconstrued, declaring that this “American type of research” for which the extended politico-judicial history of the Americans have made them accustomed to but not necessarily in the Ghanaian context.

Justice Dotse said that Dr Atuguba is entitled to his views and that they will thoroughly study the findings, he nonetheless essentially ridiculed it saying “you are entitled to your views, but I thought that when we meet, and this gathering is essentially Justices of the Superior Court and you come, we are assembled here, and you drum this into our ears. I think it is an insult of the highest order but as judges and academics I think we accept it, we will look at your entire presentation on context”.

The above statements together with others that I have been privy to on social media is somewhat indicative of our approach to dialogue and the broader public policy considerations of academic research. I particularly find quite problematic the learned Justice Dotse’s posturing about the study being “insulting”. As Bright Simons and others like myself argue, research is not meant to soothe anyone’s ego. At the very least, Dr Atuguba substantiated his claims with some primary and contextual evidence by providing statistics and citing cases, however flawed it may have been regarding its empirical validity.

While I am not privy to the entirety of the session, I would have expected the judges and other participants in the room to have further probed the lead researcher, for example, on the underlying hypothesis from a jurisprudential and political science perspective, the methodology, and assumptions before critiquing the conclusions. For example, it is pertinent in the literature on the so-called “loyalty effect” or “judicial partisanship effect” that many of these studies, especially the empirical ones, try to control for spurious correlations and causal claims. Hence, the critical question one needs to ask is whether indeed the fundamental driver for the political cases in the period in question (the late 1990s to late 2000s) in which, the court’s judgments started “becoming clear on the lines of party appointments, as per the arguments of the researcher, can be attributed to other factors. Fundamentally, what are the limitations of the work, and the counterfactuals and were these isolated or discounted as being insignificant in reaching the conclusions? Furthermore, I ask: do we really need an ideological identity in our political arena given contemporary evidence which shows both parties becoming more centrist? And if so, to what extent should this really matter in the appointment of Supreme Court judges, and in determining the outcome of cases at the Supreme Court? I say this because most of these cases at Ghana’s SC, at least in recent times, are not along hardcore ideological lines like Brown v. Board of Education in the United States. They are matters of simple constitutional interpretation in my lay man’s view.

In concluding, we should encourage people, especially our public intellectuals, journalists and academics, to provide critical analysis on the way taxpayer-funded public institutions function, including the judiciary. No one single institution should be above external oversight and accountability demands. We deserve the best! Nonetheless, such publicly-sensitive works should be subject to the standards of peer and editorial reviews anchored on the Rotarian Four-Way test namely “Is it the truth? Is it fair to all concerned? Will it build goodwill and better friendships? And will it be beneficial to all concerned? It is only by doing this that we can attain the attain quality we seek, and the subsequent public policy implications regarding empirical validity and its general applicability seriously considered by stakeholders.

Dr Atuguba should be commended for initiating such research and the discussions ensuing out of it as this is good for our democracy. Perhaps what he could do, in the public interest, is make the PowerPoint presentation available or publish his findings as a Working Paper pending submission as a fully peer-reviewed paper to whatever journal of his choice. In fact, I suspect he may have submitted an abstract and full manuscript to the GIMPA Law Conference Committee, who probably subjected it to some peer-review.