No matter how we slice and dice the data, cases of COVID-19 in Sub-Saharan Africa are relatively low. While some pointers have been provided on the potential causes (for example, BCG vaccination to ‘heat theory’, among others), we don’t fully understand the underlying drivers of this trend. This would, of course, become a significant source of academic and policy studies in a post-COVID-19 world and how African countries can build resilience to future pandemic outbreaks of this kind. 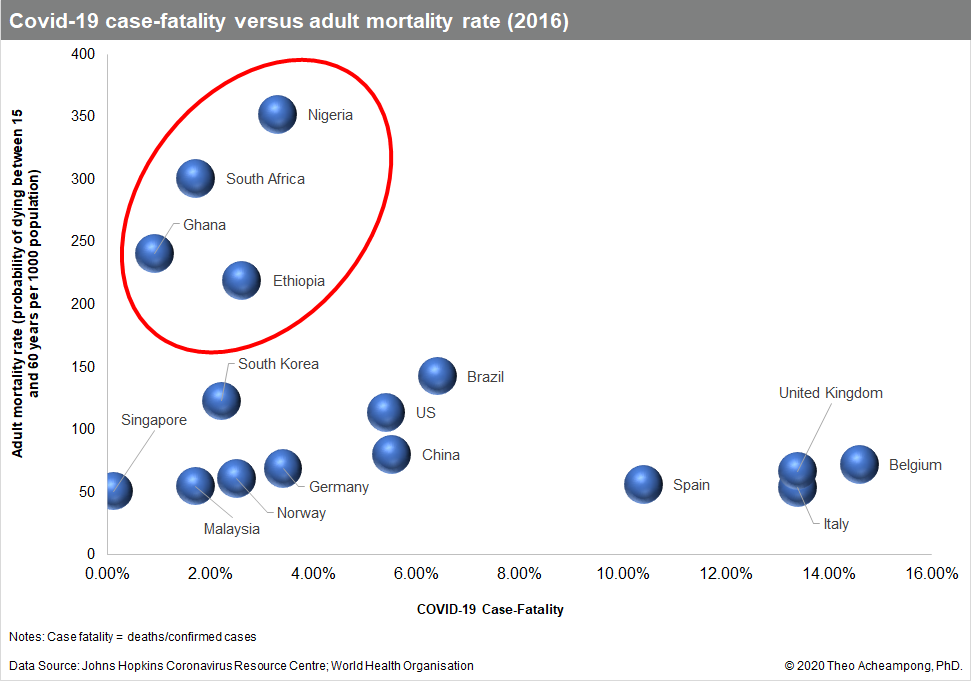 In the chart below, I have plotted COVID-19 case-fatality versus adult mortality rate. The COVID-19 case-fatality is the ratio (percentage) of deaths to total confirmed cases while the adult mortality rate is the probability of dying between 15 and 60 years per 1,000 population. A cross-tabulation of the two data points, as shown in the chart indicates that you are more likely to die on an average day in Africa (from other ailments and causes) than you would from COVID-19. One could argue Sub-Saharan Africa has been spared the worse of the COVID-19 disease.

The truth is, our already defunct health infrastructure and economic systems can barely deal with such viral outbreaks on the scale seen in Europe, America and China. A case in point is Ebola. According to projections from the World Bank, an estimated USD2.2 billion was lost in 2015 in the GDP of three West African countries, namely Liberia, Sierra Leone and Guinea. The outbreak resulted in lower investment and a substantial loss in private sector growth, agricultural production and cross-border trade from restrictions on movement, goods, and service. Liberia was reported to have lost “8% of its doctors, nurses, and midwives to Ebola while Sierra Leone and Guinea lost 7% and 1% of their healthcare workers”, respectively (See Evansa et al, 2015).